BARROW-IN-FURNESS: IN MY LIFE (PHOTOGRAPHY BOOK BY BRIAN MOXHAM)

* BRIAN Moxham is a man on a mission. The proprietor of the Pepperland Collect shop in Barrow-in-Furness has always been a keen photographer, and he has now launched his own book of photographs of the town. 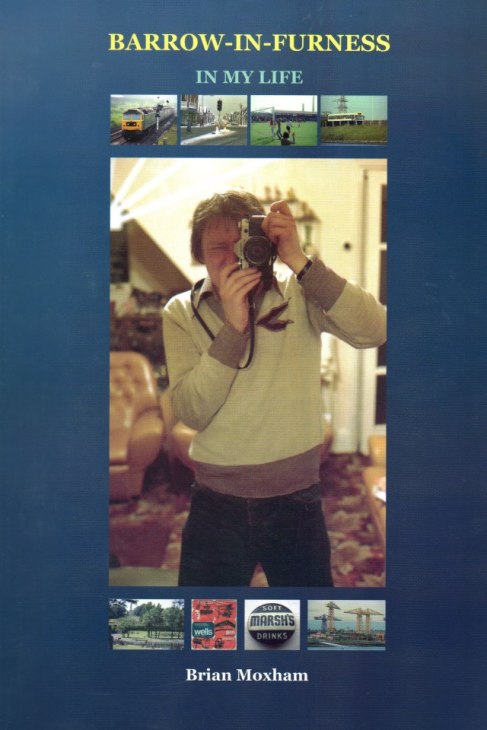 Always an enthusiastic collector, he opened his eclectic memorabilia shop in Barrow in November 2005. Originally located in Buccleuch Street, he can now be found in nearby Scott Street. The shop sells an amazing selection of items, from Doctor Who and other sci-fi related items, American and British comics, vintage concert programmes and badges plus a large selection of vinyl LPs and singles.

Brian’s favourite band are The Beatles, so it is quite fitting that he has subtitled his photographic book about Barrow, In My Life.

“It’s a song on the band’s Rubber Soul album sung by John Lennon”, says Brian, “and it just seemed appropriate somehow. He is looking back at his life then, just as I am now”.

There have been quite a few books about Barrow over the years, but Brian feels that his publication is different in one important respect. “A lot of books about Barrow go back in history really a bit too far for me”, he says. “My book is about my generation, and the life we lived in the town at the time”.

Brian’s photographs, and there are almost a hundred of them reproduced in colour in the 64-page A4 format paperback book, are a personal history of living and growing up in Barrow in the period 1970 to 1985.

He has captured aspects of the town that are no longer with us, such as his much admired shot of the Astra cinema in deep snow in 1980. One of actor Jack Nicholson’s most memorable films, One Flew Over The Cuckoo’s Nest, was showing at the fondly remembered cinema at the time, as the hand-placed individual lettering reveals, as folk try and navigate their way through the deep snow.

The building has now been demolished, and the more modern Emlyn Hughes House and the statue of one of the town’s most famous sporting sons now occupy the site.

“I never ever thought the town would change as much as it has”, says Brian. “For example, that particular corner of Abbey Road and Holker Street is gone now, and changed forever”.

Walking around the town with a procession of fairly cheap Kodak cameras, Brian captured great sporting moments from his beloved Barrow AFC as well as the much-missed cream and dark blue buses that served Barrow throughout the 70s.

He eventually graduated to a fully manual operation Canon AT-1 single lens reflex camera, which can be seen in the self portrait on the front cover of the book. Other photographs cover local trains and the railway, leisure time in Barrow park and the thriving Vickers shipyard as they prepared to launch HMS Invincible, which is seen surrounded and somewhat dwarfed by huge cranes which have all but disappeared now.

Although Brian naturally hopes the book will be successful, his motives in producing it and making it available are not necessarily financially driven. “I wanted to give something back to the community”, he says. “The book is definitely not a reference work. It’s a very personal vision, and it’s the way I saw the world around me at the time. It’s been a real labour of love”.

Aside from an introductory essay, there is very little text in the book. “To get people’s reactions and recollections to the photos is more important to me”, he says, “and I didn’t want to swamp the book with over-long captions for each photo”.

Every picture tells a story, so they say – and there are more than a few tales to be unfolded and enjoyed in this book, which is a boon for nostalgic Barrovians everywhere with fond memories of a town that has changed so much since then.

* Barrow-in-Furness: In My Life is available to buy from a number of places in Barrow, including Pepperland Collect (Scott Street), Waterstone’s (Portland Walk), Heath’s (Dalton Road), the Dock Museum, the Tourist Information Centre at The Forum (Duke Street) and the Post Office at Mill Lane on Walney. The former Tinner’s Rabbit shop in Ulverston and the Greetings bookshop and newsagent in Millom are also stocking the book.

* First published (in amended format) in the Evening Mail (Wed.6.July.’11)